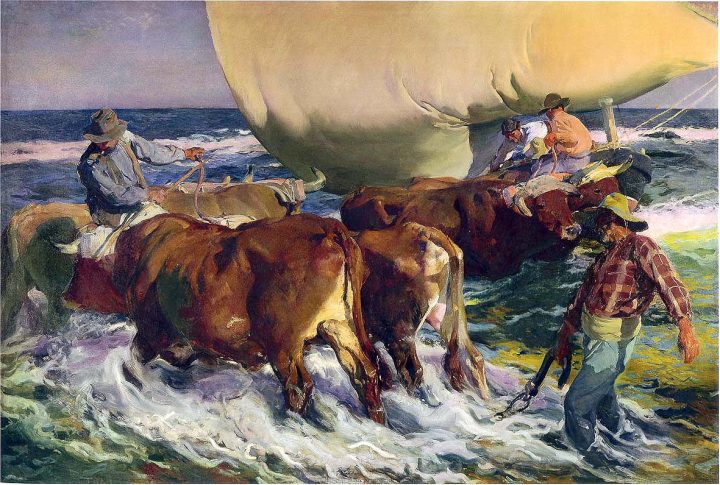 This week we again read from the Prophet Amos. An introduction to Amos and the time and place of his writings may be found in our reflections on Amos from last July. This particular passage emphasizes the destruction and exile of the northern kingdom of Israel by the Assyrians in 721 BC. This was a key event in the history of the Jewish people and has entered folklore as the lost tribes of Israel. Many “histories” have been fabricated about what happened to them. Yet the point is that there was no experience of an Exodus, unlike their forebears under Moses or their successors in the reign of Cyrus. They did not return to their land but were lost to history.  Amos sees the reason why very clearly and is not hesitant to explain it.

We have seen that the Northern Kingdom was very prosperous and under Jeroboam 2 (783–743 BC). He had considerable success in playing the major powers off against each other. This had made the people complacent and greedy. Whenever we read from the book of Amos, we confront the reality of injustice. Last week, we saw God’s special anger at the people who thought they could replace justice with piety. This broke the connection between God and the people with disastrous results.

We begin today with:

Woe to the complacent in Zion,
to the overconfident on the mount of Samaria,
Leaders of a nation favored from the first,
to whom the people of Israel have recourse
(Amos 6:1)

Amos will show them that their complacency has made them blind. The next two verses are not quoted in this passage but are very pertinent to the whole story:

Pass over to Calneh and see,
go from there to Hamath the great,
and down to Gath of the Philistines!
Are you better than these kingdoms,
or is your territory wider than theirs?
You would put off the evil day,
yet you hasten the reign of violence
(Am. 6:2–3)

Calneh, Hamath, and Gath were important and powerful cities which were subjugated by the Assyrians. The leaders of Israel thought they would escape because they worshiped the true God. As we saw last week in considerable detail this is untrue. God is repulsed by worship financed by injustice to the poor. To refer to just one passage:

I hate, I spurn your feasts,
I take no pleasure in your solemnities;
Your cereal offerings I will not accept,
nor consider your stall-fed peace offerings.
Away with your noisy songs!
I will not listen to the melodies of your harps.
But if you would offer me holocausts,
then let justice surge like water,
and goodness like an unfailing stream.
(Am. 5:21–24)

The passage for our reading today continues with a devastating litany of the actions of an effete elite: reclining to eat was not at this time a widely held Jewish custom but an import from the enemy Assyrians. The ivory couches speak of conspicuous consumption. Lambs from the flock and calves from the stall means that they were purposely raised for eating, a most unnecessary luxury. Wine was usually drunk from goblet sized utensils, bowls meant extravagant and wasteful.  Most cutting was assuming that they were the equal of David as a musician.

The effect of this was that they were blind to the world around them: “they are not made ill by the collapse of Joseph.” (Am. 6:4–6).

The consequences of this are dire:

Therefore, now they shall be the first to go into exile,
and their wanton revelry shall be done away with
(Am. 6:7)

This is a point that Amos has made before and even more colorfully:

Hear this word, women of the mountain of Samaria,
you cows of Bashan,
You who oppress the weak
and abuse the needy;
Who say to your lords,
“Bring drink for us!”
The Lord GOD has sworn by his holiness:
Truly the days are coming upon you
When they shall drag you away with hooks
(Am. 4:1–2)

Our reading this week ends here, but let us continue for a few more lines to see the consequences of injustice-induced blindness,

The Lord GOD has sworn by his very self,
say I, the LORD, the God of hosts:
I abhor the pride of Jacob,
I hate his castles,
and I give over the city with everything in it
(Am. 6:8)

The punishment of Israel will not be an accident of history but a divine initiative. It has come from their injustice which God finds unnatural:

Can horses run across a cliff?
or can one plow the sea with oxen?
Yet you have turned judgment into gall,
and the fruit of justice into wormwood
(Am. 6:12).

This is inevitable and they cannot be spared the consequences:

You rejoice in Lodebar,
and say, “Have we not, by our own strength,
seized for ourselves Karnaim?”
(Am. 6:13)

These were two cities which the Israelites had taken great pride in conquering, but it would be of no avail:

Beware, I am raising up against you, O house of Israel,
say I, the LORD, the God of hosts,
A nation that shall oppress you
from Labo of Hamath even to the Wadi Arabah
(Am. 6:14)

The nation is Assyria which conquered and destroyed Israel in 721 BC.

The Exodus of Moses and the restoration of Jerusalem were the great defining experiences of the Jewish people. God had saved his people and had brought them back to life.

Yet the destruction of the Northern Kingdom is part of that history as well and as instructive. It was a time and place marked by an extreme and growing disparity between the rich and the poor, and perhaps more to the point, this was a divide that was becoming permanent. Amos has, no doubt, that this was because of dishonest means.

For Amos, God would not offer exile, much less exodus, for those who so blatantly ignored his desire to protect the poor: the penalty was extinction.