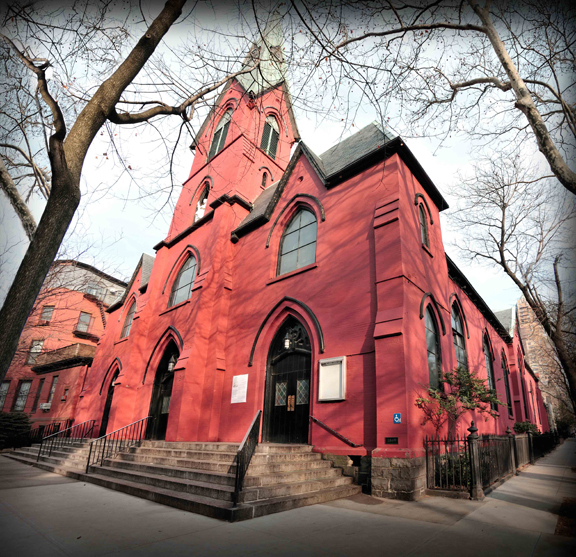 The church building of St. Charles Borromeo was designed in 1868 by renowned Irish-American architect Patrick Charles Keely. It is said to be Keeley’s 325th church in a prolific career in Catholic architecture.

The church  is a brick structure in the Neo-Gothic or Gothic-revival style with a brick tower and metal steeple in the center of the front facade. The flat side elevation reflects the interior space with seven tall and slender stained glass windows with pointed arches. At the exterior the forth bay – the central bay – is expressed as a shallow cross nave with its individual roof, larger window and protruding wall. The frontal building block is subdivided by buttresses into three parts, each with a door and window on-axis above. The central door and window are larger and together with the tall tower they emphasize the main entry to the church. A wide flight of steps leads up to the main floor level and to the three entry portals. The three doors open into one shallow narthex (lobby) and continue to lead to another set of three doors into the main church space. 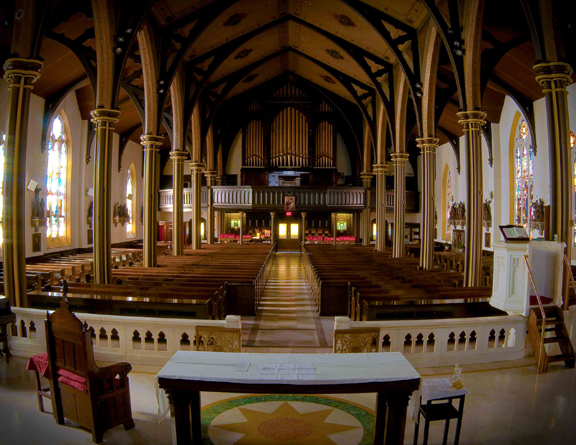 The interior is subdivided into three naves: a wider and taller main nave and two narrow side naves each seven bays long. The  choir of the church is rectangular in plan and can be seen as the eighth bay of the main nave.  The whole space is covered by one sloping but plain roof that extends all the way from the center to the exterior walls and is supported by a set of pointed arches that spring from the column heads.

A line of columns separates the three naves from each other. Each column consist of a central square pier with four circular half columns bundled around them. The columns rise without a base straight out of the floor. The capitals are designed in the Gothic style of densely-compressed proportion. 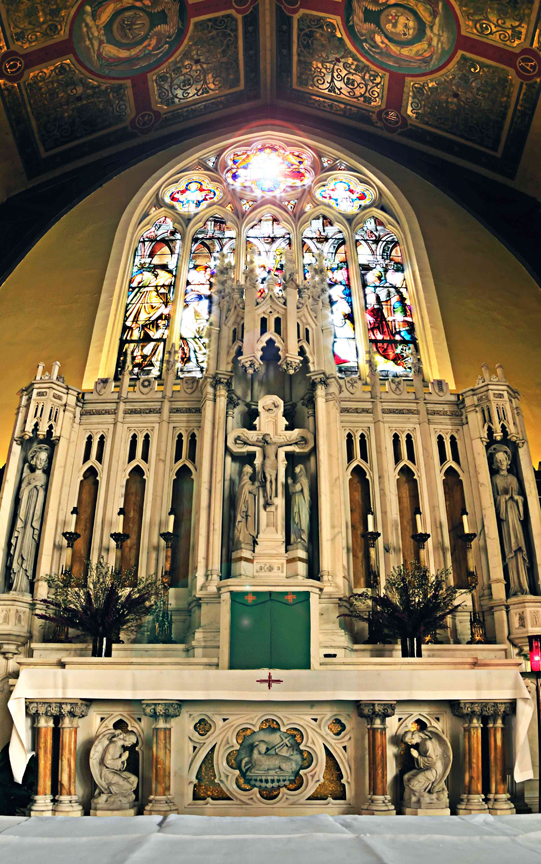 The choir is the space that holds the richest decoration with an altar, the free-standing chancel and a low choir screen of white marble, dark wood screens with back-lit stained glass panels and numerous sculptures, all designed with Gothic ornamentation and emphasis on verticality and slender proportion with quatrefoils and rows of blind, pointed arches. The largest stained glass window of the church is located at the end of the choir above the altar. It depicts a scene with St. Charles Borromeo. The space at the other end of the church, above the entry, is dominated by the large organ.

The ceiling as well as the surfaces of the pointed arches are richly decorated with stencil work while the walls are plastered and plain. Along the side walls seven stained glass windows with scenes from the New Testament repeat the rhythm of the nave with one window per bay. The largest stained glass window of the church is located at the end of the choir above the altar.