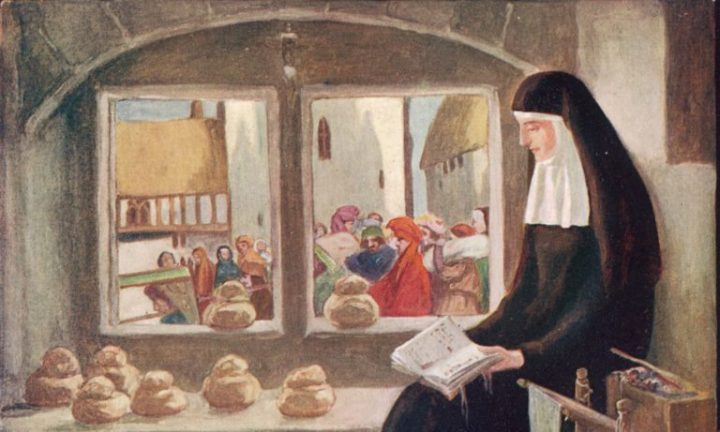 We last read from the third person to be given the name Isaiah on the Epiphany (Jan. 5, 2020). This Isaiah wrote after many of the Jewish leaders accepted the invitation of Cyrus the Assyrian king to leave Babylon and rebuild Jerusalem and its temple. He and the other settlers discovered that they were pioneers and that this was going to be long and hard. The reading used for the Epiphany, Isaiah 60:1–6) told the Jewish settlers what they could expect if they remained faithful to the LORD. Today’s reading shows them and us what faithfulness means.

The section begins with a complaint from the settlers:

In early Judaism, fasting was not directly an ascetic practice, but was associated with morning. Third Isaiah’s near contemporary the prophet Zechariah told the people:

Thus says the LORD of hosts: The fast days of the fourth, the fifth, the seventh, and the tenth months shall become occasions of joy and gladness, cheerful festivals for the house of Judah; only love faithfulness and peace.
(Zec. 8:19)

Isaiah will in no way deny that these fast days are good and holy, but they are not good and holy in themselves.

Lo, on your fast day you carry out your own pursuits,
and drive all your laborers.
Yes, your fast ends in quarreling and fighting,
striking with wicked claw.
(Is. 58:3–4)

They may not eat, but they still work and indeed make their laborers toil without food. This may indeed make everyone irritable and on edge. The reason why their fasts are not seen by the LORD is that they are the wrong kind fasts.

Compare what they are doing:

Is this the manner of fasting I wish,
of keeping a day of penance:
That a man bow his head like a reed,
and lie in sackcloth and ashes?
(Is. 58:5)

With want he wants:

This, rather, is the fasting that I wish:
releasing those bound unjustly,
untying the thongs of the yoke;
Setting free the oppressed,
breaking every yoke;
(Is. 58:6)

Our passage begins here. Remember that they are in a rugged environment and there are people—fellow Jews—who are in dire straits. The Lord is demanding basic charity;

Sharing your bread with the hungry,
sheltering the oppressed and the homeless;
Clothing the naked when you see them,
and not turning your back on your own.
(Is. 58:7)

All the leaders of the people knew people who are hungry, homeless, and inadequately dressed. We should find especially pointed the last line: “turning your back on your own.”

That the colony in Jerusalem was not prospering as much as the people would have expected or liked was the major issue of the day. The prophet Haggai thought that it was because of the tardiness of the people in rebuilding the temple and their lack of devotedness in worship even when it was completed. Isaiah however sees the situation in a more traditionally prophetic perspective and here earns his right to be called Isaiah.

I will not listen. Your hands are full of blood!
Wash yourselves clean!
Put away your misdeeds from before my eyes;
cease doing evil;
learn to do good.
Make justice your aim: redress the wronged,
hear the orphan’s plea, defend the widow.
(Is. 1:15–17)

I, the LORD, have called you for the victory of justice,
I have grasped you by the hand;
I formed you, and set you
as a covenant of the people,
a light for the nations,
To open the eyes of the blind,
to bring out prisoners from confinement,
and from the dungeon, those who live in darkness.
(Is. 42:6–7)

In short: self-affliction is not a good in itself, but feeding the hungry is. We must mourn the tragedies of the past, but it is to help us to address the needs of the present.

This will be rewarded:

Then your light shall break forth like the dawn,
and your wound shall quickly be healed;
Your vindication shall go before you,
and the glory of the LORD shall be your rear guard.
(Is. 58:8)

This the Lord will hear. But notice how skillfully Isaiah wraps this promise in warning. Today’s passage ends with:

If you bestow your bread on the hungry
and satisfy the afflicted;
Then light shall rise for you in the darkness,
and the gloom shall become for you like midday
(Is. 58:10)

He even gets more pointed in the verses that follow:

The ancient ruins shall be rebuilt for your sake,
and the foundations from ages past you shall raise up;
“Repairer of the breach,” they shall call you,
“Restorer of ruined homesteads.”
(Is. 58:12)

We Americans are like the Jews who returned to Jerusalem to rebuild and restore it. It is the greatness of our country that we have so often seen ourselves as on a mission and the tragedy that we have never succeeded in fulfilling it. We began our national life with a Declaration of Independence whose stirring words on freedom were written by a slave holder. We would even fight a war to free the slaves and then institute Jim Crow laws. We would open our doors to immigrants and indeed build a monument in New York harbor to welcome the poor and huddled masses and then shut the doors when they were most needed to be opened. My aunt worked tirelessly to get her family out of Germany before World War 2. Jews did not do well under the quota system and they were exterminated.

We can learn much from Isaiah today. We need to mourn much in our past and as we contemplate Lent, fasting is a wonderful way to do it. Yet we need to judge our fasting by the one and only standard that our faith provides: love. Fasting which does not help us to love others builds nothing and just makes us cranky.