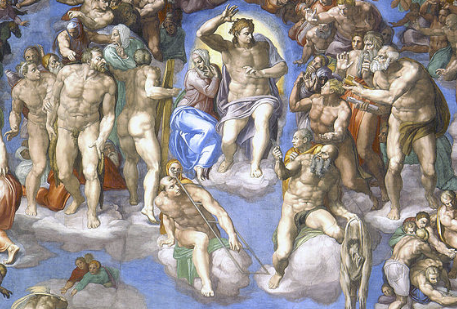 The books of Maccabees can be confusing and have been very controversial over the centuries. Luther and the other reformers banished both books from the Bible because of praying for the dead and thus providing an opening for Purgatory (2 Mac. 12:38–46). Its clear statement on the resurrection of the body, not merely immortality, has made some Jews very uneasy as well. The seeming passivity applauded in 2 Maccabees has annoyed those of a more activist bent who fully endorse 1 Maccabees. Yet there is great wisdom to be found in them both.

Today, we read from 2 Maccabees and the first confusion is that it was completed before 1 Maccabees by a different author with a different theology about persecution and resistance. They do however share a common origin in the relentless assault on Jewish customs and worship by King Antiochus IV. This began around 200 BC with educational “reform” and culminated with his demand that Greek gods be worshiped in the temple at Jerusalem. We have looked at this historical situation previously in some detail, but will now look at its spiritual dimension.

Continuing this false worship would have ended Judaism. Some people, mostly the rich and powerful who did not wish to lose their positions, consented, sometimes indeed enthusiastically. Others however resisted. There were thus, as always, two principal options. The first was armed resistance. These books take their name from Judas Maccabaeus who led the eventually successful guerrilla movement. The story of his family is related in 1 Maccabees. However, there is the opposite approach of prayer and martyrdom. This is the approach proclaimed in 2 Maccabees. The tone of the book is set in the chapter before this with the martyrdom of Eleazar, an elderly and highly respected scribe. He was told that he had to publicly eat pork, for him a grave sin. When he objected his friends, who had previously capitulated, told him that he could bring food of his own choosing escaping the death penalty (2 Mac 6:22).

At our age it would be unbecoming to make such a pretense;
many young men would think the ninety-year-old Eleazar had gone over to an alien religion.
Should I thus dissimulate for the sake of a brief moment of life,
they would be led astray by me, while I would bring shame and dishonor on my old age.
(2 Mac. 6:24–25)

The section we read today follows immediately. Here, young men and their mother were given the same option. They respond as defiantly as Eleazar:

One of the brothers, speaking for the others, said: “What do you expect to achieve by questioning us? We are ready to die rather than transgress the laws of our ancestors.”
(2 Mac. 7:2)

With the same results:

At that the king, in a fury, gave orders to have pans and caldrons heated.
While they were being quickly heated, he commanded his executioners to cut out the tongue of the one who had spoken for the others, to scalp him and cut off his hands and feet, while the rest of his brothers and his mother looked on.
(2 Mac 7:3–4)

The brothers are very clear about their motivation:

At the point of death, he said: “You accursed fiend, you are depriving us of this present life, but the King of the world will raise us up to live again forever. It is for his laws that we are dying.” (2 Mac 7:9)

Note what is being said and not said here. He is saying that he and his mother and brothers will be “raised up to live again forever.” This is not immortality in the Greek sense, nor a merely spiritual life after death. For the Jewish mind, a fully human life cannot be conceived of without a physical body. Raised up means restored.

A few verses later his brother:

Put out his tongue at once when told to do so, and bravely held out his hands, as he spoke these noble words: “It was from Heaven that I received these; for the sake of his laws I disdain them; from him I hope to receive them again.”
(2 Mac 7:10–11).

This is not exclusively spiritual language. He means a body. This was a rather new idea in Judaism. 2 Maccabees was based on a book written about 150 BC but the version we have now was completed after 130 BC. The earliest mention of the resurrection of the body was in the Book of Daniel about 150 BC:

Many of those who sleep
in the dust of the earth shall awake;
some shall live forever,
others shall be an everlasting horror and disgrace
(Da. 12:2)

The author of Daniel was of the same tradition as 2 Maccabees and shared some of the same teachings. These included non-violent resistance and martyrdom. Obedience to the law and tradition would keep the people together. He also shared the instinctive prophetic thrust of the entire Old Testament.

When the sixth brother was about to die, he said:

“Have no vain illusions. We suffer these things on our own account, because we have sinned against our God; that is why such astonishing things have happened to us.
The people of the promise are called to the highest standard of justice. But the LORD is the God of all and he calls all to justice: Do not think, then, that you will go unpunished for having dared to fight against God.
(2 Mac. 7:18–19)

The idea of a bodily resurrection was not yet fully developed, and we see some areas of difference and questions not yet raised. Will the evil rise as well, will we all have to wait until the end of the world to rise? These are technical questions of some interest to scholars which we need not investigate now.

The most obvious thing is the most important. If our bodies are so important that the LORD will restore them then how should we treat them here and now? This is very far ranging. It means treat our own bodies to—remember a phrase once overused and now unfortunately almost banished—as “temples of the Holy Spirit” We should eat and drink moderately and express our sexuality appropriately. It also means caring for the physical needs of others. This too is extensive: from individual acts of charity to direct political action. We should also never forget however the importance of the arts. Our senses are made to receive and create beauty and a life which has not feed itself in the arts is spiritually malnourished.

What the resurrection of the body is in the afterlife will be an exciting revelation in our futures, what it is now is a call to active discipleship in the world around us.