We celebrate today the feast of our Patron Saint, Charles Borromeo. To list even the most basic facts of his life, much less his accomplishments, would be an impossible task for a brief homily. Even more amazing is that he was only 46 when he died in 1584. 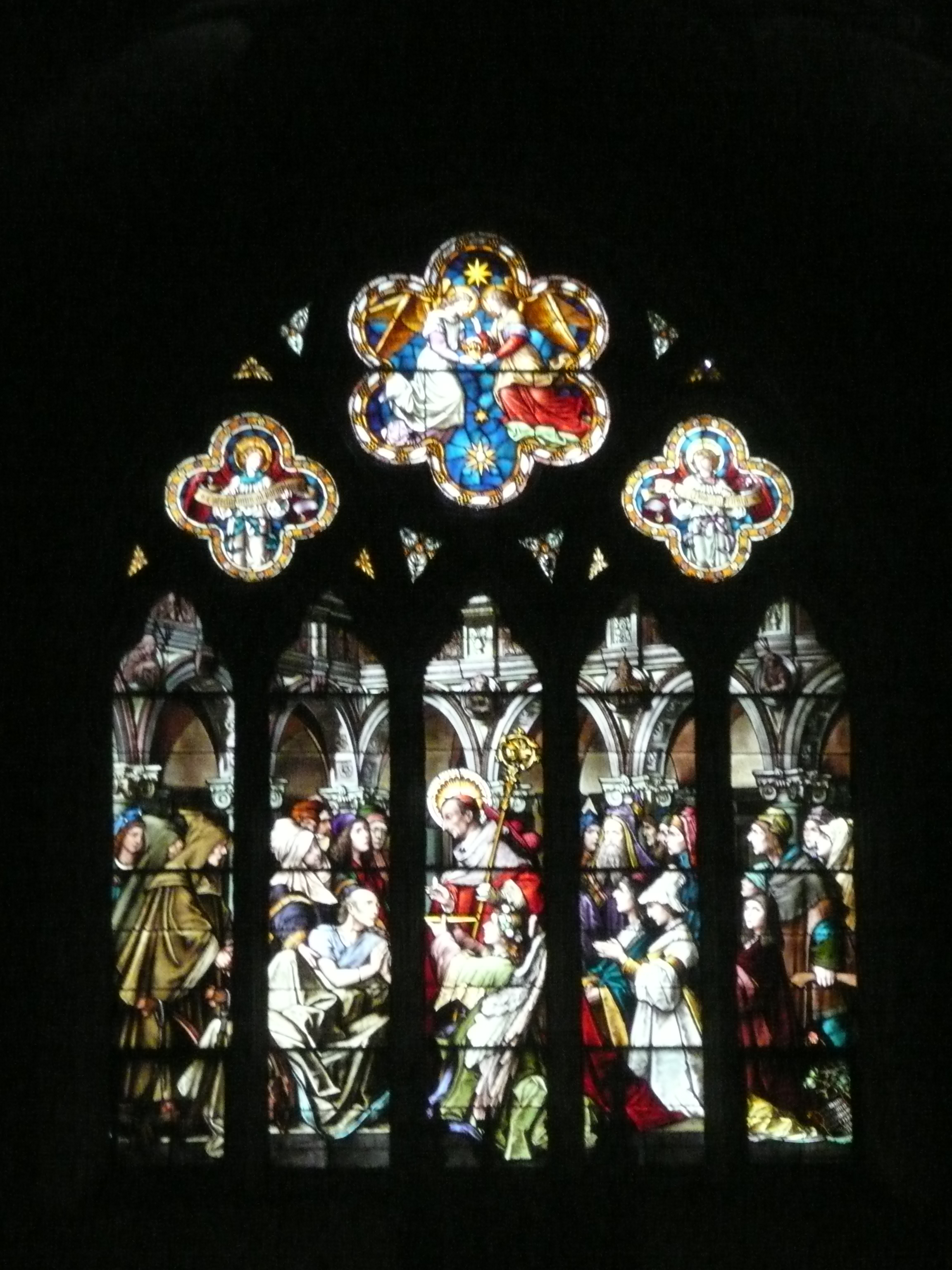 High points are found in the main window above the main altar. The principal scene is St. Charles distributing communion to a sick person on a stretcher. This commemorates his distribution of the Eucharist to the sick during a plague and for having Mass said in the open air, allowing the afflicted to more easily attend. If you look above the main window there are three windows with angels: the one on the left shows a scroll referring to his institution of religious education in his Diocese of Milan. He is considered the founder of both Catholic schools and Sunday school. On the right, the window reflects his emphasis on the Sacrament of Penance. In the central window, two angels bear a crown which foretells his canonization after his death. Not on our window is the clearest sign that he was a reformer: one of his priests who did not want to be reformed tried to assassinate him.

We remind everyone that there is more information on St Charles and the art in the church on our website. https://www.stcharlesbklyn.org/history/stained-glass-windows/

We could say much more about St Charles, but more relevant for us today is his cousin and successor Federico Borromeo. Like Charles, he was born a rich man destined for effortless success. He originally wanted to become a Jesuit, but although he did not, he was nonetheless claimed by the Church and named a cardinal at the age of 23. A most cultured man, he was dedicated to scholarship and moved by beauty. He created leaned societies and the first truly public library on the European continent. He wrote over 100 books and monographs on many subjects and, why we remember him especially today, can be credited as publishing the first hymnal for lay people. He also renovated the Cathedral in Milan, shoring up its foundations and beautifying its interior.

Now I do not mean to suggest that he was a mere aesthete. During the great famine of 1627-1628 he fed 2,000 poor people daily at the gates of his residence from his own income. He was an example of such absolute heroism that nearly one hundred of his clergy died caring for their flocks in the famine and resulting plague. This is beautifully told in Alessandro Manzoni’s novel “The Betrothed”. I should note that this is Pope Francis’ second favorite novel; coming after only the Brothers Karamazov. In it, Federico is portrayed as the model priest, and I must admit that I give it to young priests particularly to read his admonition to a well-meaning but cowardly pastor. I have no reason to believe that this did not reflect his actual beliefs and actions. After his death, the citizens of Milan erected a statue in his honor and wrote on the pedestal: “He was one of those men rare in every age, who employed extraordinary intelligence, the resources of an opulent condition, the advantages of privileged station, and an unflinching will, in the search and practice of higher and better things.”

He demonstrates the connection between beauty, worship and charity. Much of our efforts as a parish for at least the next 3 years will be to renovate the fabric of the Church building. There will be no major changes in the sanctuary or nave – the major visible changes will be decent bathrooms and a usable basement. Through it all, we must seek not to lose the forest for the trees and must remember that this building exists for worship: turning our minds and hearts to God. Beauty has always been the handmaid of worship, and a church needs to be a place where we recognize that we are doing something different. A church such as ours can literally stop us in our footsteps, slow us down and center us on the most important things. Given the distractions of our times, this is more important and needed than ever

Although I hope that people leave here feeling blessed and holy, worship is ultimately judged not by what we feel on Sunday but what we do the rest of the week. Who is better off among your family and friends or in our community because you went to Mass today? Did you help someone at work, did you show kindness to an annoying person, did you take time to offer your services to someone who needs them? The needs are endless, the opportunities without limit, and the power that comes from true worship beyond comprehension. Yet, how much of Jesus do we see in a country in which most people call themselves Christian, and more to the point what does St Charles add to this community? Who outside these walls would know or care if we disappeared tomorrow?

Today we will add another aid to our worship with our new hymnals.

We are bodily creatures and the more senses we can engage in our worship, the more effective it will be. Philosophers (eg. Suzanne Langer) tell us that each art form allows our bodies to connect with a dimension in the real world. Buildings engage us in space. A grand church building can be literally awesome and an intimate one engenders a serenity that no other structure can provide.

Music in this theory connects and develops our sense of time. Many of us seem dominated by time and trying to make each second effective. No wonder time itself may seem exhausting. Great music can suspend time and give us a taste of the infinite and a moment’s peace to gather ourselves together to praise and worship God

Please embrace this opportunity. We bless not so much the hymn books as ourselves, and desire to offer not only everything to God, but every moment. Unlike Federico Borromeo, we may not have extraordinary intelligence to display, nor either the resources of an opulent condition nor privileged station, but we can ask for an unflinching will to – by our worship – search for and practice higher and better things.