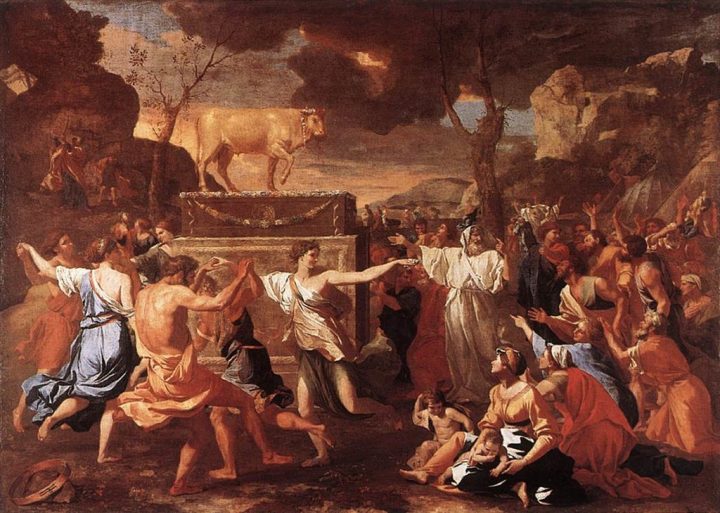 We return today to the double world the Pentateuch. We must look both at what is related about the original event, in this case the Exodus about 1450 BC, but also the situation during its final editing in the restored Jerusalem of 500 BC. Key to both is the experience of liberation. Moses led the people out of slavery in Egypt. The Jews, who were instrumental in completing the text, were freed from Babylon. Indeed, the miraculous return of the people to Jerusalem would have been the lived experience of those who compiled these texts. It was the greatest resurrection of any religion until the resurrection of Jesus centuries later. The authors were very sophisticated writers and they could juggle many themes at the same time. Today we will look at the first stages of the development of the hereditary priesthood in Judaism.

As we begin the story today, Moses has been on Mt Sinai with the Lord for considerable time. The people become restless:

They gathered around Aaron and said to him, “Come, make us a god who will be our leader; as for the man Moses who brought us out of the land of Egypt, we do not know what has happened to him.
(Ex. 32:1)

Note two things immediately. They say it was “the man Moses who brought us out of the land of Egypt.” Moses did not bring them out, the Lord did. They do not understand the basic situation. Also, the people may have meant for the golden calf to be a representation of “the Lord” as opposed to another god. This may not seem as serious to us, but we must remember that the third commandment is “to have no graven images.” The distinctive idea of the religion of Israel is that God is not a part of nature or creation in general, as other deities were considered, but above and beyond them. Once he is connected to a creature, he will eventually be lowered to one in at least the popular consciousness. The people do not get to decide who or what will represent God only he does, and he wanted Moses not an animal however well gilded.

Let me alone, then, that my wrath may blaze up against them to consume them. Then I will make of you a great nation.”
(Ex. 32:10)

God is now threatening to destroy the people, but assures Moses that he is still favored and will be rewarded. Yet Moses intercedes for the people:

But Moses implored the LORD, his God, saying, “Why, O LORD, should your wrath blaze up against your own people, whom you brought out of the land of Egypt with such great power and with so strong a hand?
(Ex. 32:11)

Note the irony. The people did not want Moses as their leader but now, although he is promised his own nation, he intercedes for them with great passion and bravery. A golden calf cannot do that!

This is a great moment in Israeli’s history and the psalmist sings:

Therefore he said he would destroy them—
had not Moses, his chosen one,
stood in the breach before him,
to turn away his wrath from destroying them
(Ps. 106:23)

These events were being written down a millennium after they occurred by a group that had themselves escaped slavery in a second Exodus. It was also compiled by priests who wished to show that God’s presence on earth, his representative, was the temple and the worship that occurred there. In that sense, the temple replaced Moses or indeed any great charismatic leader.

This is a very complicated story and one that reflected many traditions that had to be consulted and were not put together seamlessly. We shall only look at the next step which may be found in this chapter of Exodus.

How did the Levites become the priests? We should remember that originally there were no ordained or even hereditary priests. The male head of the family or indeed the first-born son would offer the sacrifice or perform other priestly duties as we have seen as early as Abraham. The genesis of the Levite priesthood can be found a few verses later:

He stood at the gate of the camp and cried, “Whoever is for the LORD, let him come to me!” All the Levites then rallied to him,
and he told them, “Thus says the LORD, the God of Israel: Put your sword on your hip, every one of you! Now go up and down the camp, from gate to gate, and slay your own kinsmen, your friends and neighbors!”
The Levites carried out the command of Moses, and that day there fell about three thousand of the people).
Then Moses said, “Today you have been dedicated to the LORD, for you were against your own sons and kinsmen, to bring a blessing upon yourselves this day.”
(Ex. 32:26–29)

We may find Moses’ unleashing the Levites disconcerting at best, but the great Florentine political philosopher Niccolò Machiavelli found this ruthlessness refreshing, necessary, and effective. In a famous section of his Discourses he writes:

He who reads the Bible with discernment will see that, before
Moses set about making laws and institutions, he had to kill a
very great number of men who […] were opposed to his plans.
(D. III.30.4, p. 547)

The start of the Levite priesthood is also reflected in Deuteronomy:

At that time the LORD set apart the tribe of Levi to carry the ark of the covenant of the LORD, to be in attendance before the LORD and minister to him, and to give blessings in his name, as they have done to this day
(Dt. 10:8)

History, it is said, is written by the victors and the Levites won over other claimants to the priesthood and so we get their story. It may however obscure a more basic issue.

This is clearly the institutionalizing of faith in the Lord. Priests had considerable influence on the final text. As we have seen so clearly the last few years, priesthoods are uniquely susceptible to corruption and special pleading. This should not however obscure the importance of centralized worship, especially when sacrifice is involved. Sacrifice is particularly appropriate and beneficial for Jewish and now Christian worship. It allows the adherent to direct attention to a transcendent indeed personal God, but also to have a communal experience with fellow believers. To use more modern terminology, this cannot be effectively accomplished without a common liturgy and an ordained priesthood. We shall see again the steps along the way in further weeks, but it is important to know when it began to evolve and why.

Let us conclude by noting that we should not be condescending to the Jews who made the Golden Calf. They sought to make a religion that was easier to understand and ultimately to control. Do we not find ourselves doing the same? In our own time and place, the Golden Calf for so many is libertarian or à la carte religion. We make the freedom to express ourselves—indeed create ourselves—by our own choices and decisions the principal reality of our lives. For some, this is the ability to terminate a pregnancy now even at delivery and for others to have unrestricted access to lethal weapons. Where is the worship of the one true God? Where are the bonds of community? Where is our Moses to tear down the idol?