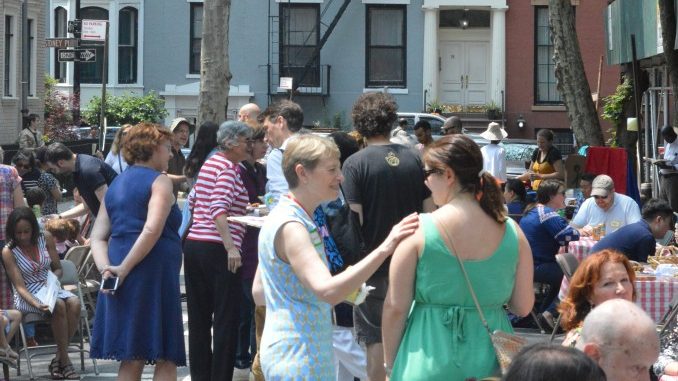 We celebrate this week the feast of Pentecost. It is a Jewish feast – indeed one of the great pilgrimage feasts – when Jews were encouraged to go to Jerusalem and offer sacrifice. It was originally a harvest celebration, but quickly became connected with the Exodus and the giving of the Law. Pentecost means 50 – it is celebrated by Jews 50 days after the Passover and commemorates Moses bringing the law to the people.

Luke takes great time and effort to set up the situation. He tells us immediately that this is important.

When the time for Pentecost was fulfilled, they were all in one place together. Acts 2:1

He is indicating that what follows must be interpreted in light of Pentecost: very basically, looking at how they will live their lives.  In Luke’s gospel, when Jesus knew that it was time for him to offer himself up, he writes:

When the days for his being taken up were fulfilled, he resolutely determined to journey to Jerusalem. Luke 9:51

After setting the stage, Luke shows us a very powerful manifestation of the power of God:

2 And suddenly there came from the sky a noise like a strong driving wind, and it filled the entire house in which they were. 3 Then there appeared to them tongues as of fire, which parted and came to rest on each one of them. Acts 2:2–3

This is clearly reminiscent of the giving of the law on Mt Sinai:

16 On the morning of the third day there were peals of thunder and lightning, and a heavy cloud over the mountain, and a very loud trumpet blast, so that all the people in the camp trembled. 17 But Moses led the people out of the camp to meet God, and they stationed themselves at the foot of the mountain.

18 Mount Sinai was all wrapped in smoke, for the LORD came down upon it in fire. The smoke rose from it as though from a furnace, and the whole mountain trembled violently.

19 The trumpet blast grew louder and louder, while Moses was speaking and God answering him with thunder. Exodus 19:16–19

The Hebrew word for Spirit is the same for wind (ruah)

This was predicted in Luke’s gospel at Jesus’ Baptism.

16 John answered them all, saying, “I am baptizing you with water, but one mightier than I is coming. I am not worthy to loosen the thongs of his sandals. He will baptize you with the holy Spirit and fire. Luke 3:16

We do not experience the Spirit as spectators. The Spirit must enter us, thus we are filled with the Spirit. This is the pattern in Luke’s Gospel usually before someone does or says something “inspired”. To take one example, Elizabeth at the very beginning of the Gospel

41 When Elizabeth heard Mary’s greeting, the infant leaped in her womb, and Elizabeth, filled with the holy Spirit, Luke 1:41

The Spirit especially in Acts is also not for personal edification or even wisdom but for the proclamation of the Gospel.  As Jesus was being taken up into heaven, he told the disciples:

8 But you will receive power when the holy Spirit comes upon you, and you will be my witnesses in Jerusalem, throughout Judea and Samaria, and to the ends of the earth.” Acts 1:8

The Spirit has a great repertoire of gifts. Speaking in tongues is emphasized in Acts. Note this is not ecstatic speech which is not understandable, but is more like music than oratory. It is the ability to be understood by all people. As we have seen reading Acts all these weeks the good news of Jesus is for all and requires that the church speak to every person intelligibly.

4This point is made several times in Acts most clearly for Peter when he Baptizes the Centurion  Cornelius:

“46 for they could hear them speaking in tongues and glorifying God” Then Peter responded7 “Can anyone withhold the water for baptizing these people, who have received the holy Spirit even as we have?” (Acts 10:46-47)

Later Paul “completes” the Baptism of disciples in Ephesus who had only the Baptism of John: “ And when Paul laid (his) hands on them, the holy Spirit came upon them, and they spoke in tongues and prophesied”

As we saw, the Jewish feast of Pentecost was a pilgrimage feast and Jews from all over the world would seek to attend much as Muslims today will seek to make the Hajj to Mecca. The list of places which next follows would have shown the original readers that the whole world had heard the word of God. It would be like us saying that people from all the continents were present.  Yet, as always with Luke, there is a further dimension.

Remember that the “inhabitants of Mesopotamia” were the Assyrians and Babylonians who had oppressed the ancestors of the Jews. They were slaves in Egypt and now under Roman domination. The preaching of the Gospel to them fulfills the promise of the prophets that the God of Israel would be a light to all. Remember the words of Isaiah.

22 Although the LORD shall smite Egypt severely, he shall heal them; they shall turn to the LORD and he shall be won over and heal them.

23 On that day there shall be a highway from Egypt to Assyria; the Assyrians shall enter Egypt, and the Egyptians enter Assyria, and Egypt shall serve Assyria.

24 On that day Israel shall be a third party with Egypt and Assyria, a blessing in the midst of the land, 25 when the LORD of hosts blesses it: “Blessed be my people Egypt, and the work of my hands Assyria, and my inheritance, Israel.” Isaiah 19:22–25

In Acts, the witness of the Apostles and the promise of God will be fulfilled. This is what we have seen working out in the last few weeks.

One final observation before we leave the Acts of the Apostles until next year, when we will explore a different set of readings from it. As we have seen many times, Luke connects his Gospel with Acts with some of the same themes. One of these is the importance of Mary, the Mother of Jesus. She is the only person to appear in the beginning and body of the Gospel and also in Acts.

After the Ascension of Jesus, the Apostles return to the upper room:

All these devoted themselves with one accord to prayer, together with some women, and Mary the mother of Jesus, and his brothers (Acts 1:14)