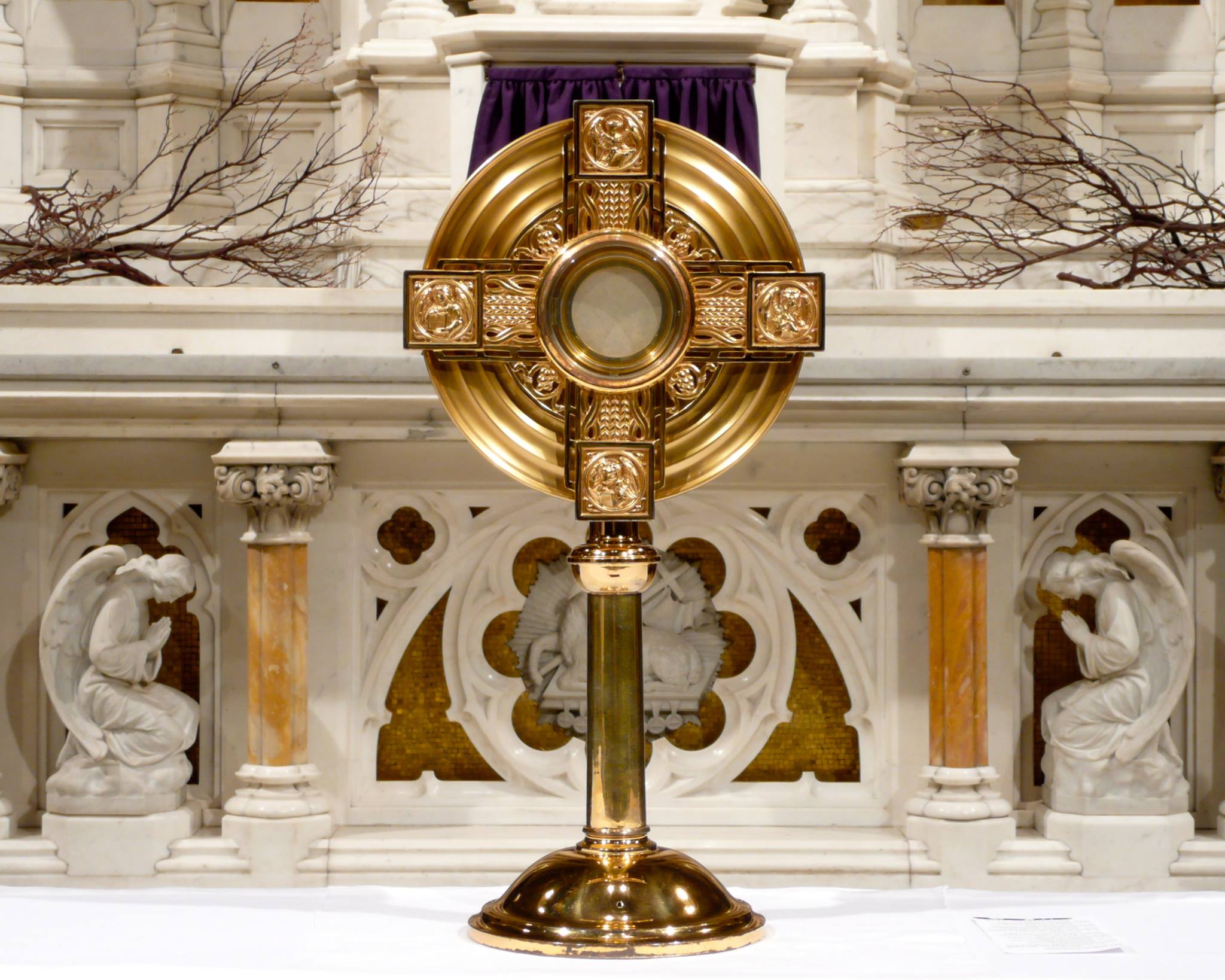 The Annual Peter’s Pence collection will be taken up next week at all the Masses or on-line at https://stcharlesbklyn.weshareonline.org/PetersPence . This is opportunity to support the work of the Holy See among the poor. It is also a way of showing that we approve of the ministry of Pope Francis. For both reasons, we ask you to be generous.

Solemnity of the Body and Blood of Jesus (Corpus Christi)

This week’s reading from the 14th chapter of Genesis presents many difficulties in interpretation, but a very simple and profound application.

It tells the story of Abram’s defeat of a cabal of kings – really warlords – who captured the city of Sodom and took his kinsman Lot into captivity. It is through this that he has the fateful meeting with Melchizedek, the priest king of Salem, that we read today. We do however need to see this encounter from a wider perspective

Abram and his nephew Lot were tribal chiefs of nomadic herders. They needed to move from place to place as their animals would clean the fields of usable sustenance. They both prospered and it was obvious that they would have to separate. Abram told Lot to choose first, and Lot choose the very fertile Jordon Plain near Sodom. Abram received the less desirable land of Canaan.

However, the inhabitants of Sodom were wicked, great sinners against the LORD (Gen 13:13) Also, they were involved in constant warfare with the other small city states. In one such battle, the king of Sodom loses decisively:

11 The victors seized all the possessions and food supplies of Sodom and Gomorrah and then went their way,

12 taking with them Abram’s nephew Lot, who had been living in Sodom, as well as his possessions. Genesis 14:11–12

Abram was obliged to be Lots “redeemer” and free him. Rather than ransoming him, he fights his captors in armed combat:

When Abram heard that his kinsman had been captured, he mustered three hundred and eighteen of his retainers, born in his house, and went in pursuit as far as Dan

15 He and his party deployed against them at night, defeated them, and pursued them as far as Hobah, which is north of Damascus.

16 He recovered all the possessions, besides bringing back his kinsman Lot and his possessions, along with the women and the other captives. Genesis 14:14–16

This is not the Abram that we have previously seen. Here he is portrayed as a mighty warlord who defeats his enemies by force of arms This is one reason why this section is considered an addition to Genesis from another set of stories and legends. We will see that it is very convenient for the defenders of the Davidic line, but the basic point is in keeping with the message the author is telling us in the whole book of Genesis.

We need to go a bit further to see both.

When Abram returned from his defeat of Chedorlaomer and the kings who were allied with him, the king of Sodom went out to greet him in the Valley of Shaveh (that is, the King’s Valley). Gen 14:17

Note that the king of Sodom goes out to greet Abram. He is obeying protocol and accepting Abram as the dominant party. This will be important later but now we meet Melchizedek.

Melchizedek, king of Salem, brought out bread and wine. He was a priest of God Most High. (Gen 14:18)

“God most high” is the most powerful god of the Canaanites. We must remember that at this time the Hebrews would have believed that each people had their own gods usually connected to a specific place, but that their God “The LORD” was unique in being trans-national and superior to the others.

The offering of bread and wine may be a religious ceremony or simply offering his men some refreshment; in any event, Abram accepts this blessing from this mysterious priest and indeed shows his appreciation by giving him a tithe of the goods.

Key however is that he is king/priest of Salem. By tradition this is or will be Jerusalem. Centuries later King David also acted as priest in Jerusalem.

Although the official priests were always from the line of Aaron, the brother of Moses, they repeatedly throughout Jewish history did not fulfill their tasks, and the authors of Genesis and the Pentateuch in general wanted to remind people of the sacred dimension of kingship.

Melchizedek had a history of his own which would have influenced how this would have been interpreted when finally written down after the exile.

4 The LORD has sworn and will not waver:

This is usually interpreted that the priesthood of Melchizedek came from another, older, source than Aaron and is superior to it. Even the first post-exile readers of this may have thought that Melchizedek was speaking for their “Lord” as God most high. Indeed, the reference to creator may be an addition to confirm this. However, this would not have been the original understanding.

If we read beyond the section in today’s selection, we see a more traditional, or at least expected development.

Remember that this king was defeated and now must ask Abram to return his kingdom. He is reflecting common ancient practice: a general who rescued a city kept the goods recovered but did not keep the city or its people for himself.

2 But Abram replied to the king of Sodom: “I have sworn to the LORD, God Most High, the creator of heaven and earth,

23 that I would not take so much as a thread or a sandal strap from anything that is yours, lest you should say, ‘I made Abram rich.’ Genesis 14:22–23

Abram refuses to even accept what would have been considered his due because he has put all his trust in the Lord. To accept anything from anyone would be to violate this vow. He defeated the enemies of Sodom to redeem his kinsman not for any gain.

This is an eternal lesson. The God of Abraham will always find a way to support and guide us. Sometimes from the usual suspects like Abraham, Moses and David, but other times through a mysterious figure like Melchizedek. No matter how he wishes to connect with us, our response is to accept and know that whatever the messenger, the gift is always the Lord’s.