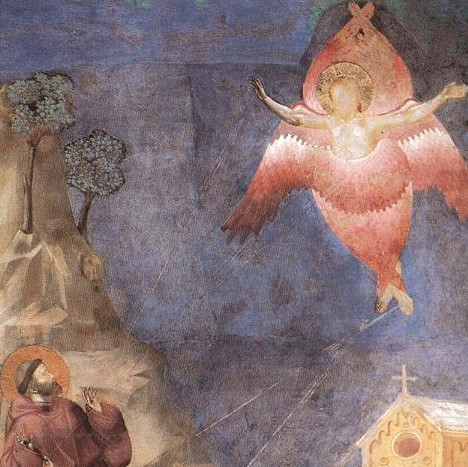 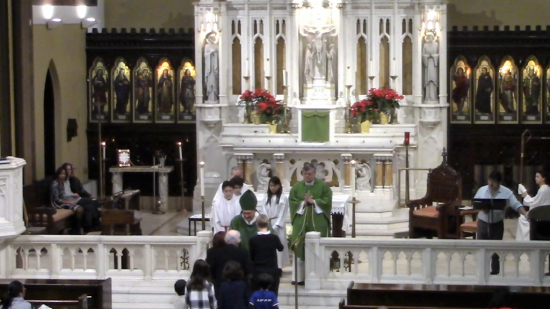 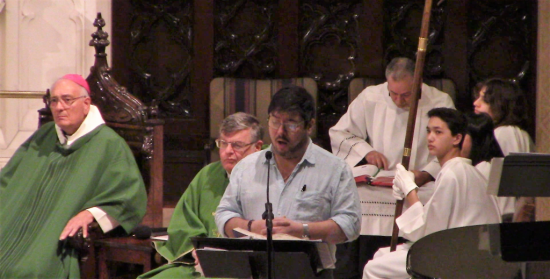 Bishop’s Visit and Strategic Plan
Thank you for all of your support for Bishop DiMarzio’s visit last Sunday!  We presented our strategic plan for the next three years, which was well received. Read a copy of the report that we presented at the following link:

The Study of St Luke:

St Luke was a talented writer and used many literary devices to bring great depth to his Gospel and to the “Acts of the Apostles”. He writes on an epic scale, but keeps his story coherent by using references to other parts of his writings and to the Hebrew Scriptures.  Next week, we will look at his distinctive way of quoting from the Old Testament and himself. This week we will look at how he incorporates Mary the Mother of God into the very texture of his work.

When Jesus tells Peter to go out again and cast his nets, Peter responds:

5 Simon said in reply, “Master, we have worked hard all night and have caught nothing, but at your command I will lower the nets.” Luke 5:5

When Mary is told by the Angel that she is to bear a child for God, she responds:

Luke expects us to read his Gospel over often, and as we do so, to see Mary as the model disciple. Although the legend that he painted Mary’s picture is somewhat far fetched there are many echoes like this to Mary throughout the Gospels and in Acts. This realization should come not from reading a commentary but by opening our hearts to the message. A great lesson from Luke that I hope we will all learn this year is “What Mary is, we shall be”.

Last week we examined the call of the prophet Jeremiah. We saw that it shared characteristics with the call of other Jewish prophets. Most importantly that this call from God was not solicited nor even wanted by the prophet. Like Moses, the true prophet knows that he does not have the ability in himself to complete his task and that God must give him the ability. We compared Jeremiah with Isaiah:

The Lord extended his hand and touched my mouth, saying. See I place my words in your mouth Jeremiah 1:9

6 Then one of the seraphim flew to me, holding an ember which he had taken with tongs from the altar.  He touched my mouth with it. “See,” he said, “now that this has touched your lips, your wickedness is removed, your sin purged.” Isaiah 6:6–7

Today we will look at Isaiah’s call more closely.

The first thing to be remembered is that several people used the name Isaiah. We have been looking mostly at those who spoke during and after the return of the Jews to Jerusalem in the 6th century BC. The Isaiah we will examine today tells us very clearly that he began his ministry in 742 BC – the year King Uzziah died. This is significant.

Uzziah had reigned for 40 years and had greatly increased the GNP of his kingdom. But he did so by favoring the elite and creating prosperity for some by taking the properties of those not connected to the powerful. This was compounded by his successors, who made alliances with Assyria requiring the Judeans to pay vast sums in protection money which the rich managed to avoid further impoverishing the peasants. It is clear why in the very first chapter of Isaiah God says to the people:

Put away your misdeeds from before my eyes;

This is clearly seen in Chapter 5 immediately before the call of Isaiah. After telling the leaders that he created His people to be his vineyard for the enjoyment of all, they had made it their own and robbed him of his proper harvest of justice and community.

8 Woe to you who join house to house,

who connect field with field,

Till no room remains, and you are left to dwell

alone in the midst of the land!

9 In my hearing the LORD of hosts has sworn:

Many houses shall be in ruins,

God will not protect those who have built their wealth on the misfortunes of others.  This was often by using the land to produce grain for export making basic commodities more expensive for the common people thus forcing them to give up more land. A permanent underclass was created frustrating the divine plan.

The reason of course was the desire of some to live well at the cost of others living at all:

11 Woe to those who demand strong drink

as soon as they rise in the morning,

And linger into the night

while wine inflames them!

12 With harp and lyre, timbrel and flute,

they feast on wine;

But what the LORD does, they regard not,

They seek their pleasure not their Lord. There will be consequences:

13 Therefore my people go into exile,

because they do not understand;

Their nobles die of hunger,

and their masses are parched with thirst.

But who will speak for God? We now come to Isaiah.

All those who will use the name Isaiah believed that God is the Lord of history. His will shall be felt in the world. They also believed that he is holy, separate, different than the world. Only those who are holy themselves may speak for him. They need to be purged from sin, and that cannot be done by oneself.

This is the point of the first section of today’s reading.

Seraphim are usually considered to be angels, but that was to come later. The word means, “burning” and intentionally recalls the Seraph “burning” serpents who struck the Israelites in the desert.

This is terrifying to Isaiah. He believed that a human being could not survive a face to face encounter with God. Note here that he does not consider himself any better than the rest of his people.

5 Then I said, “Woe is me, I am doomed! For I am a man of unclean lips, living among a people of unclean lips; yet my eyes have seen the King, the LORD of hosts!” Isaiah 6:5 (NAB)

God agrees and he is not given soothing words but as we have seen:

6 Then one of the seraphim flew to me, holding an ember which he had taken with tongs from the altar. 7 He touched my mouth with it. “See,” he said, “now that this has touched your lips, your wickedness is removed, your sin purged.” Isaiah 6:6–7

This is painful but only through this can Isaiah be able to preach the word of God. His reluctance is removed, and he can willingly accept the role of prophet.

We see this in today’s Gospel. St Peter experiences the power of God, and knows that he is sinful. He says to Jesus, “Depart from me, Lord, for I am a sinful man”. He is so careful that he does not follow Jesus until Jesus tells him not to be afraid. Luke does not spare showing us Peter’s faults, but he also shows us that he never lost this sense of unworthiness before God. In Luke’s second volume “The Acts of the Apostles”, he writes: “we believe that we will be saved through the grace of the Lord Jesus, just as they will.” Acts 15:11

These stories of the call of prophets were important because there were many who called themselves prophets, but who merely repeated the common wisdom of powerful groups and interests. From Moses through Isaiah, Jeremiah, and Peter, a true prophetic calling has meant a recognition of personal sinfulness. Until we find people who will do the same, we will not have prophets, only pundits.