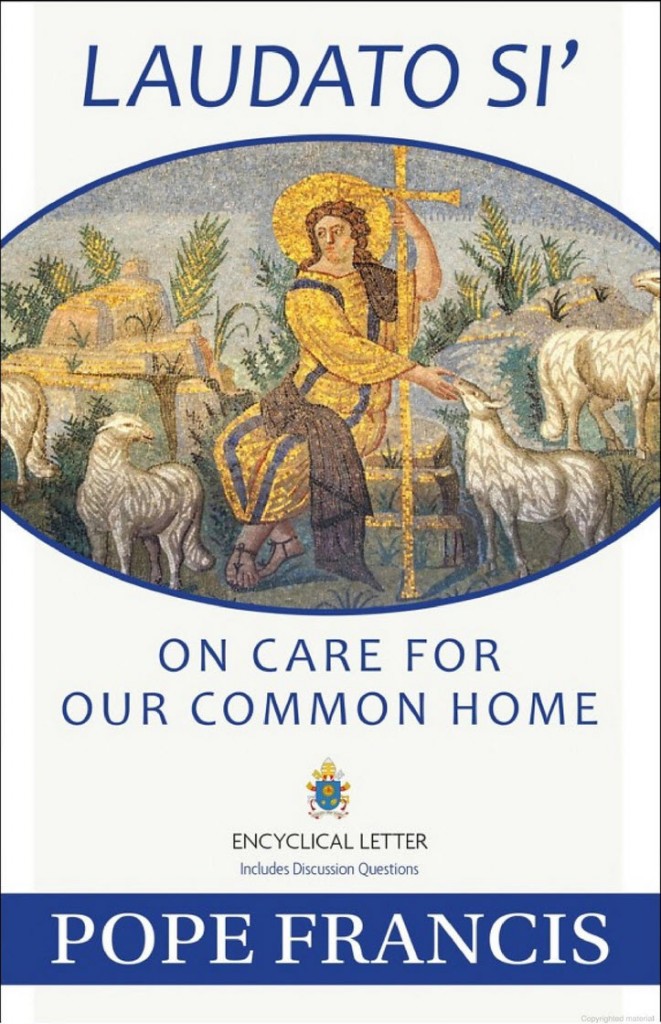 In Part II, I covered the introduction to Laudato Si’ with emphasis on its spiritual roots in Pope Francis’ relationship with St. Francis of Assisi. Today, I will give an overview of the first five Chapters, necessarily not comprehensive and necessarily from “30,000-feet.”

Chapter One describes our Earth’s woes. We are familiar with some: climate change and threats to water (including increasing scarcity), air, soil and biodiversity, for example. We may be less familiar with how these things bring about a decline in the quality of human life, and we may not realize that the burden of environmental degradation is born disproportionately by the most vulnerable. The Pope urges us to search for the right path between two wrong views; one view says we need do nothing because the earth will heal itself with the application of new technology and without the need for any ethical considerations or deep change; the other says that the only solution is to reduce the human population and all forms of intervention in nature.

Chapter Two, entitled the “Gospel of Creation,” ties the environmental world view shared by St. Francis and Pope Francis to scripture. Key for me is the Pope’s refutation of an interpretation of Genesis 1:28 to mean that man’s “dominion” over the earth amounts to “control” of all its resources and creatures, an interpretation that has led to unbridled exploitation. Instead, he emphasizes other portions of scripture which admonish us to “’till and keep’ the garden of the world” (cf. Genesis 2:15). “‘Tilling’ refers to cultivating, ploughing, or working, while ‘keeping’ means caring [for], protecting, overseeing, and preserving.”

Chapter Three is “The Human Roots of the Ecological Crisis.” It covers, among many other things, technology, creativity, and power. Anthropocentrism is the view that the universe revolves around us. Combined with the “lie” that earth’s resources are infinite, that view results in earth’s degradation, and deprives other of God’s creatures of the benefit of earth’s bounty. Technology and creativity, manifestations of God’s gift of intellect, can become ends in themselves, or be perverted to serve the goal of exploitation. Power can become its own goal if wielded to dominate the earth, rather than to care for, protect, and preserve the earth.

The central theme in Chapter Four, entitled “Integral Ecology,” is that we are not faced with two separate crises, “one environmental and one social, but with one complex crisis that is both societal and environmental.”  Ecology is the study of “the relationship between living organisms and the environment in which they develop.” The Pope urges us to blend traditional environmental ecology, which tends to focus on our air, water, soil, flora, and fauna, with “economic ecology” and “cultural ecology.” Economic ecology is study of economic issues, predominantly development, as they effect human beings, directly and through their effect on the traditional “environment”. Cultural ecology recognizes the importance of treating cultural values in the same way we should treat economic values, being mindful of cultural context, respecting the symbols and customs of each human group. The Pope’s point is that solutions require integration of all these approaches.

The Pope then escalates this notion of integration to the principle of serving the common good, which is: “the sum of those conditions of social life which allow social groups and their individual members … access to their own fulfillment.” Looking to the future, he calls for “Justice Between the Generations.” He returns to his criticism of consumerism: “Rampant” individualism and self-centeredness will prevent us from leaving an inhabitable planet for those who follow us.

In Chapter Five, entitled “Lines of Approach and Action” the Pope speaks of “escap[ing] the spiral of self-destruction which engulfs us.” He applauds attempts to forge consensus on the need and methods to protect the earth, while acknowledging limited success. He urges accelerated dialogue on several levels, including the international community, “to ensure that solutions are proposed from a global perspective, and not simply to defend the interests of a few countries” and on the local and national levels, to adjust policies perpetuating internal inequities. These dialogues must include not only the political players but other stakeholders, like major corporations, and religions must be in dialogue with science. His starting list of topics includes transparency in decision-making, and politics and economics in the context of human fulfillment.

In the next, and last Part, I will cover Chapter Six, which has the deceptively innocuous title of “Ecological Educational and Spirituality.” Watch out for Part IV.