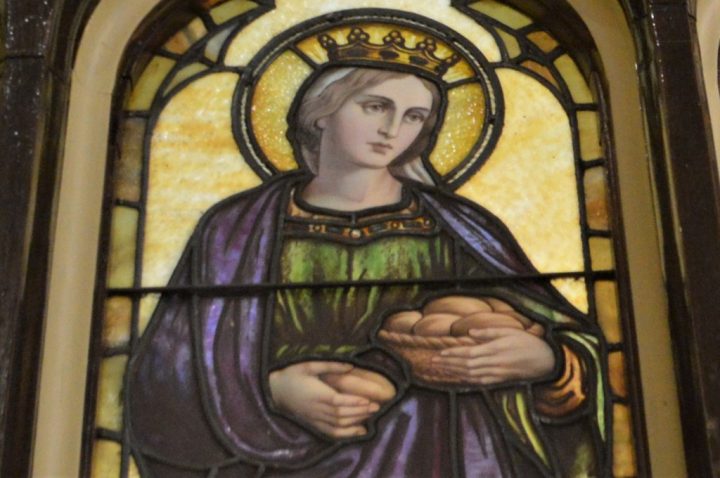 St. Elizabeth of Hungary from our sanctuary stained glass. A princess, she gave up her position of royalty and wealth to serve the poor, endearing her as the patron saint of charities. Her feast day is November 17.

From the Bishops Conference

This week, the American Bishops met to discuss issues facing the Church. One of them was Catholic participation in electoral politics. They decided to reissue “Forming Consciences for Faithful Citizenship” with an update but without substantial revision. This was written 12 years ago before the election of Pope Francis and there was concern that the document did not recognize his perspective especially on the interrelatedness of all matters of life. The suggestion to include paragraph #101 from Francis’ Apostolic Exhortation “GAUDETE ET EXSULTAT” in its entirety was  rejected as too long. You however may find these less than 200 words enlightening and informative.

101. The other harmful ideological error is found in those who find suspect the social engagement of others, seeing it as superficial, worldly, secular, materialist, communist or populist. Or they  relativize it, as if there are other more important matters, or the only thing that counts is one particular ethical issue or cause that they themselves defend. Our defence of the innocent unborn, for example, needs to be clear, firm and passionate, for at stake is the dignity of a human life, which is always sacred and demands love for each person, regardless of his or her stage of development. Equally sacred, however, are the lives of the poor, those already born, the destitute, the abandoned and the underprivileged, the vulnerable infirm and elderly exposed to covert euthanasia, the victims of human trafficking, new forms of slavery, and every form of rejection.[84] We cannot uphold an ideal of holiness that would ignore injustice in a world where some revel, spend with abandon and live only for the latest consumer goods, even as others look on from afar, living their entire lives in abject poverty.

The prophet Malachi, who we read today, lived in Jerusalem after the temple was restored (515 BC) but before Ezra came to reform its administration. (450 BC).  About 460 BC would be a good estimate. This situation is reflected in his message.

As we have seen many times, the Jews who responded to the call to return to Jerusalem and rebuild it were pioneers despite themselves. They began with high hopes that they could replace everything which was lost but discovered that clocks do not move backwards. None of them would have had personal memories of Jerusalem or the temple and they often lapsed into romanticizing the glories of the past and underestimating the difficulties of the present. These illusions were quickly ended.

The rebuilt temple was adequate, but no more than that, and the institution of Kingship was effectively eliminated. The Persian overlords would support a restored temple but not a king. The temple alone would be the sign of unity for the Jews. Malachi’s job as prophet was to strengthen it, despite the less than stellar quality of the religious leadership.

As our Patron Charles Borromeo discovered, reforming the clergy is not for the faint of heart and it takes the direct action of God himself to accomplish anything. Malachi uses the traditional language of the “Day of the Lord”.

God tells the people:
Lo, I am sending my messenger
to prepare the way before me;
And suddenly there will come to the temple
the LORD whom you seek (Mal 3:1)

This will not be a social call:

For he is like the refiner’s fire,
or like the fuller’s lye.
3 He will sit refining and purifying (silver),
and he will purify the sons of Levi, (Mal 3:2–3).

Then, as now, reform needs to start with the clergy, “the sons of Levi”. Where the clergy contains the priesthood, as with the Jews of this day and Catholics always, the integrity of the sacrifice is of key importance.

Refining them like gold or like silver
that they may offer due sacrifice to the LORD.
4 Then the sacrifice of Judah and Jerusalem
will please the LORD (Mal 3:3–4).

After the clergy have been cleansed, those who are most influential need to be confronted:

5 I will draw near to you for judgment,
and I will be swift to bear witness
Against the sorcerers, adulterers, and perjurers,
those who defraud the hired man of his wages,

Against those who defraud widows and orphans;
those who turn aside the stranger,
and those who do not fear me, says the LORD of hosts (Mal 3:5)

Note how he puts all of these together as those who do not “Fear me”. These are people who through great success or great failure have lost their awe of God.

They show that by ceasing to obey the law of God:

Surely I, the LORD, do not change,
nor do you cease to be sons of Jacob.
7 Since the days of your fathers you have turned aside
from my statutes, and have not kept them.
Return to me, and I will return to you,
says the LORD of hosts. (Mal 3:6–7).

This robbed them of their enthusiasm, but they must begin to be restored to the Lord’s favor:

The decline is most clearly seen in failing to supply the needs of worship. Worship is a matter of Justice. We owe God obedience and submission. It is mandatory. Tithes not only supported the maintenance of the temple but the care of the clergy who at that time had no other source of income and we have seen again the care that God wishes of the poor in Mal 3:3-5.

If they return to proper worship and wider justice, all nations will call you blessed, for you will be a delightful land, says the LORD of hosts. (Mal 3:12).

We now come to the section selected for us this week. Malachi is structured around six pronouncements with several debates. Each debate begins with the Lord accusing the people of turning away from Him. Today we hear:

They then list the times they have seen the wicked prosper (Mal 3: 15) but God assures those who fear him that there is a record book which lists them as well as those who do not (Mal 3:16) This book will not opened in heaven at a final judgment of all but in this world when the Lord comes to judge the world:

Then you will again distinguish between the just and the wicked,
Between the person who serves God, and the one who does not. (Mal 3:18)

The day of the Lord is like the power of the Sun. For those who do not fear the Lord the Sun will be experienced as an oven that will set them on fire and render them into stubble, mere cut stalks of grain. Indeed, they will be burned so completely that there will not even be that:  They will set them on fire, leaving them neither root nor branch. (Mal 3:19)

For those who fear the Lord, however, the sun will be experienced as justice with healing rays or wings.

There is much that we could say here but let us limit ourselves to two:

Malachi assumes that this reckoning will be a purely earthly affair. The just will be given honor in the sight of their enemies. But this did not happen. There was improvement with the reforms of Ezra, but nothing was really overturned. Compare this to the reading from Maccabees last week. There we saw that the reward for the just would be physical, because they would get their bodies back – but in the future. In the 300 years between Malachi and 2 Maccabees, the Jews came to realize that there would not be purely earthy vindication of God’s justice. Yet God is just before all else, and so there must be an Afterlife. We can never emphasize enough that the resurrection of the Body was revealed and understood to proclaim the LORD’S commitment to justice for His people. If there was no afterlife, then the LORD would be accused of not fulfilling his promises and be thus either a charlatan or simply deluded. This is not true to revelation so there must be something after this. The afterlife is not to reward our faithfulness, but to proclaim God’s truthfulness.

The other observation is that Worship is a matter of Justice. I was underwhelmed when I first heard this in the seminary decades ago. Yet, as the professor assured us that with experience, we would not only see this, but its effects as well. He was certainly correct. Failing to worship God is doing Him an injustice, and if we treat Him unjustly, should we be surprised if we treat others unjustly as well? It works the other way as well. Those who treat others unjustly will pull back from worshiping a living God. They may build wonderful buildings but will not give their hearts. Justice and Worship are always linked.

At the inaugural meeting of our group for young professionals, one of the members said: “Don’t let Monday ruin your Sunday”. We might add, nor the LORD’s Sunday. On Sunday at St. Charles, we praised Him in word and song, offered our hearts, and pledged to rebuild His Church, but if we do not act justly, then all this is empty and hollow.

Malachi tells us that the “sun of justice will arise with healing in his wings”. Let us show that we love Him on Monday by fulfilling the words of the prophet Amos: “But let justice roll down like waters and righteousness like an ever-flowing stream”. (Amos 5:24)